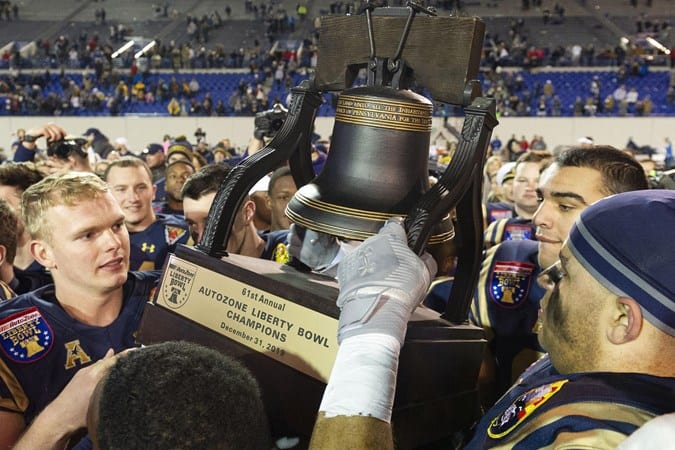 There is a phrase often used in the business world known as an inflection point. It is defined as “a time of significant change in a situation; a turning point.” In looking back at the 2019 Navy Football season, I thought it would be interesting to identify three such inflection points that helped secure Navy’s second 11 win season in five years. We will take a look at one coaching decision, one offensive drive, and one defensive stand. It just so happens that they occurred in that same order. So, here we go.

This story is familiar to most who follow Navy Football. The Mids had just finished an abysmal 3-10 season punctuated by a third straight loss to Army. And Coach Niumatalolo decided he’d had just about enough. Even though the offense had a sub par year, the defense was the primary issue. After ranking 26th in the country in scoring defense during their last 11 win season in 2015, Navy slid all the way down to 103rd in 2018. It was the same story with respect to yards allowed per game. The Mids dropped from 40th in 2015 to 86th last year.

Coach Niumatalolo understood that getting to the next level in the American Conference would require a more aggressive approach on the defensive side of the ball. I firmly believed that the Navy players had the athletic skill to play a different style of defense. The question was what kind of scheme could they install to unleash the team’s true talent? It turns out that the answer came in the form of a coach named Brian Newberry, who was from an FCS school in Georgia called Kennesaw State University.

Coach Niumatalolo began targeting certain coaches almost immediately after the loss to Army. He sought out those with a scheme that could match up against the spread offenses the Mids routinely see in the American Conference. At the same time, it still needed to effectively stop the option attacks that they had to deal with every year when they played Army and Air Force. It didn’t take him long to find his man. And in early January 2019, Brian Newberry came aboard as Navy’s new defensive coordinator.

Coach Newberry and his two assistants Kevin Downing and P.J. Volker brought in a new, fresh energy, and the cultural shift began almost immediately. The defense spent the spring and fall practice seasons learning the ins and outs of this new, aggressive alignment where a blitz could come from just about anywhere. And the results speak for themselves. The Navy defense took a quantum leap forward in the team rankings, finishing 16th in the country in yards allowed per game and 34th in scoring defense. It was a remarkable turnaround, making Coach Newberry’s hiring the first inflection point in the 2019 Navy Football season.

The Mids controlled the game for over three quarters. But they found themselves on the wrong end of a 25-21 score with 3:14 left in the contest. The defense had kept the Falcon attack in check for most of the game. But an untimely turnover gave Air Force the momentum they needed to score two quick touchdowns to put them on top. When Malcolm Perry led the Navy offense onto the field, things did not look good. The Mids were 0-4 in close games last season, and now it was looking like the same thing, different year. Besides that, the scene was very similar to two years ago when Navy gave up an even bigger second half lead. They fought back to win that one. Now the question was whether or not history could repeat itself.

One of the keys to a game winning drive is to get off to a good start. The offense checked that box by way of a fake reverse and a slotback option pass from Chance Warren to Tazh Maloy that gained 18 yards. Things changed quickly though. A run for no gain, a holding penalty, and an incomplete pass left them staring at a 2nd and 20. To make matters worse, the Mids had one less minute to work with, and the end zone was still 67 yards away. That’s when Perry took the snap from the shotgun formation, drifted to his right, and launched a long pass down the right sideline . . .

The Catch, The Conversion & The Touchdown:

When I saw how well C.J. Williams was covered, I thought the best possible outcome would be an incomplete pass bringing up 3rd and 20. How he was able to contort his body to get in front of his defender and make a diving catch 32 yards downfield, I’ll never know. It was absolutely an elite effort, and Mids were still alive. The catch ranked 2nd on the list of Navy’s Top 10 Offensive plays for 2019. Six plays later, Perry converted a fourth and one to keep the drive going. And two plays after that, he followed a textbook block by Nelson Smith and ran untouched into the end zone from three yards out. Navy had the lead 28-25 and there were only 23 seconds left in the game.

It’s tough to script a game-winning drive any better than that. The defense tacked on one more touchdown when Tony Brown scooped up a fumble and returned it eight yards for the score. The Mids had won, and they took their first step towards reclaiming the Commander-In-Chief trophy.

Last season, Navy lost to SMU in overtime when the Mustangs scored on a two point conversion. Later in the year, the team rallied from 21-3 down to lead Tulane 28-21 in the fourth quarter. But they came up short 29-28 when the Green Wave scored in the final two minutes. The Mids lost two other games by seven points to Temple and Army. Going into this season, the team’s confidence in their ability to win close games may not have been shattered, but it’s fair to say that it had taken a pretty decent beating. That’s what makes the win against Air Force such a critical inflection point for the Navy Football program. The Mids had proven to themselves that they could win those tight battles. In fact, they did it three more times against Tulane, SMU, and Kansas State. That capped off one of the best bounce back seasons in FBS history.

Though the Mids had dropped the past three games against Army after reeling off 14 wins in a row, I never got the sense that the Black Knights had the better team until their 17-10 win last year. This season, the two teams were going in opposite directions. And when they arrived in Philadelphia, Navy (9-2) came in with every intention of ending the three game losing streak. At the same time, Army (5-7) was committed to finishing the season on a high note while extending Navy’s misery for another year.

It was a terrific performance by the Mids in every respect. Malcolm Perry rushed for 304 yards. Army’s total offensive output was a lackluster 148 yards thanks to a suffocating Navy defense led by Jackson Pittman, Diego Fagot, and Jacob Springer. And J’arius Warren had perhaps the quietest 11 tackle day on record to lead the team in that category. But if I had to point one play that told the story of Navy’s dominance on defense, it would have to be when Army had 4th down and 3 from the Mids’ 39 yard line. Down 24-7 with 8:35 left in the game, the Black Knights had no choice but to go for it. And that was when Navy nose tackle Jackson Pittman decided to let everyone watching the game know what he knew already; that the Commander-In-Chief trophy was coming back to Annapolis . . .

Just prior to the snap, Pittman shifted ever so slightly to his right. Then he used his incredible quickness to defeat the center’s block and collided with Army’s Sandon McCoy one yard deep in the backfield. The Black Knights’ running back never stood a chance. Pittman planted him in the turf, and the offense took over on downs. That was essentially the ball game. Malcolm Perry added one more touchdown a couple of possessions later, and the Mids earned the right to sing second for the first time since 2015.

Navy’s 31-7 win clearly established that they were the better team. In the previous three years, they lost to Army by a combined total of 12 points. When they walked off Lincoln Financial Field early that evening, the Mids owned a 24 point victory. And talk about dominance? Army’s number of total yards was their fewest in over 15 years of the Army-Navy rivalry. Order had once more been restored to the universe.

This game represents a significant inflection point for the program. The reason for that is people now understand that Navy Football is no longer one dimensional. In the past, we fans just hoped that the defense could get a stop or two and let the triple option do the rest. Now, teams know that the Mids are more than capable of beating them with their defense also. Kansas State sure found that out in the Liberty Bowl. The Wildcats came into the game averaging nearly 30 points and 360 yards per contest. Navy held them to 17 points and 170 yards on their way to a 20-17 win.

And the fact that the Mids beat a Kansas State team that was the only one to defeat a CFP semi-finalist points to the quality of that win. It serves as more proof that the American Athletic Conference can consistently compete with the Power 5 Conference teams. The program is bound to reap the rewards on the recruiting trail also. This can translate into the team performing at a high level for years to come.

When the season ended last year, there were those who feared that Navy Football had reached a different kind of inflection point – one that would put the program on a path to mediocrity or worse. But I have read and learned enough about Coach Niumatalolo to know that you will not find a more intense competitor anywhere. There was no way he was going to let things slide backwards.

The hiring of Brian Newberry and his two assistants was one of the best moves the Navy Football program has ever made. And the emergence of Malcolm Perry as one of the most outstanding triple option quarterbacks in Navy history speaks volumes to the amount of hard work that he and Coach Ivin Jasper put in to develop his skills. Putting that together with Perry’s amazing athletic ability made it an almost unbeatable combination. There is no question that we saw plenty evidence of that this year, and the result was one incredibly memorable season.