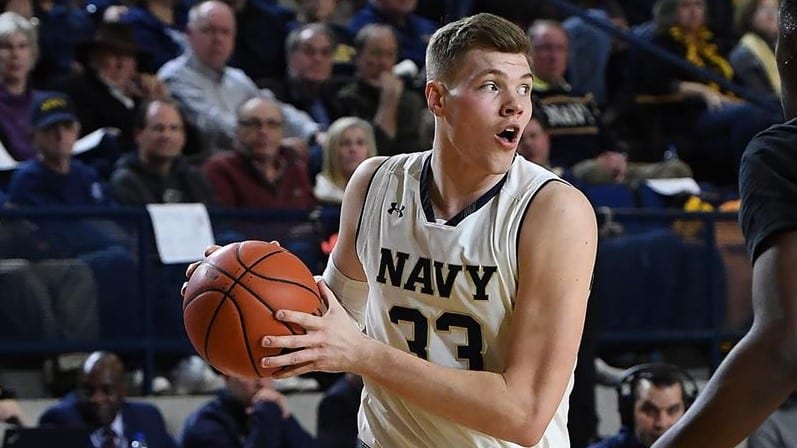 I was going to wait until next week to publish my first post on the Navy Men’s Basketball team. It seemed like pretty good timing since they would be squaring off against Army. This weekend’s goal was to watch the Mids play Lafayette so I could get more familiar with the team and their style of play. But I decided to go ahead and put together a post after seeing how exciting the game turned out to be. It was close all the way, with neither team ever having led by more than six points. In the end, the Mids managed to pull out an important win at home even though the Leopards had a 75% win probability with less than a minute to go in the contest. It was a pretty crazy finish. Before I get to that though, I figured it would help if you had a snapshot of the team.

When I first got a look at the team roster for this year, my first thought was “Wow, this Navy Basketball team is pretty young.” In fact, of the 20 players listed, 11 of them are freshmen. There is only one senior on the squad (team captain Evan Weick). Five sophomores and three juniors round out the rest of the team. The Mids were 9-7 going into the Lafayette game. Over the holidays, they took on defending national champion Virginia and actually led 41-40 before eventually falling 65-56. But they were coming off a 88-83 road win against Lehigh, posting a season high for the year in points.

The Lafayette offense relies a lot on perimeter shooting, but against the Mids, they suddenly found an interior game to go along with it. By halftime, they had forged a 38-33 half time lead. Things changed in the second half as Navy ratcheted up the defense. The Leopards went cold from the arc and their five point lead turned into a five point deficit about seven minutes in. Junior guard Cam Davis led the Mids, scoring 16 of his game high 23 points after the break.

Lafayette managed to fight back using some nice high screen and roll action with back door cuts. They retook the lead with two minutes to go. The Leopards still held a 64-61 advantage when the Mids’ came through with a typical, hard-nosed Navy basketball play. Greg Summers tipped in his own miss to cut the lead to one with 32.8 seconds to go in the game. The Leopards were still in the drivers seat though. They had the ball, and all just about all of their players on the floor were pretty good foul shooters. If the Mids were going to win this game, they would need a pretty huge break.

That’s exactly what they got following Lafayette’s final time out. After nearly committing a five second violation, Lukas Jarret threw an inbounds pass to Tyrone Perry that was just out of reach. It went off his hands and out of bounds. Now the Mids had the ball with about a two second differential between the shot clock and the game clock.

In situations like this, teams usually look to take a shot with about six to eight seconds left. If it misses, there is still enough time to get a put back off of an offensive rebound. The other strategy is to take a quality shot no matter where it comes up in the possession; especially if you have a hot shooter. That’s what happened in this case. The Mids ran a well-designed play because it allowed for more than one option. Cam Davis took the inbounds pass from the left sideline. From there he worked to the middle of the court before sending the ball to forward Luke Loehr on the right. Loehr gave it back immediately as freshman forward Daniel Deaver set a screen at the top of the key.

When Davis came around the screen, both defenders chose to go with him. That was a little surprising because Deaver faked the roll to the basket and was wide open when he popped back out on the arc where he had set the screen. The freshman was just coming off a monster game where he scored 25 points against Lehigh while hitting on both of his three point shot attempts. So he was a legitimate threat if Davis decided to come back to him. But for some reason, neither of Lafayette’s two defenders aggressively challenged Davis as he began his drive to the basket. They played off him to keep him from getting to the rim. So the Junior guard just rose up for a 15 foot jumper from the left wing and drained it. Navy was up by one with 20 seconds left to play.

Less than four seconds later, they were behind again. The Leopards had done a great job during the second half of getting the ball up the court quickly off of a made Navy basket and getting an easy lay up. It happened again after Davis’ shot. The Mids just weren’t getting back on defense fast enough (definitely NOT Navy Basketball), and Lafayette was making them pay.

There were still 15 seconds left when Davis took the inbounds pass and got the ball into the front court. Deaver set another excellent screen that practically erased the Leopard defender. That gave Davis the space he needed to launch a three pointer from about 22 feet that found the bottom of the net with just under 10 seconds to go. Navy was up by two. That was three lead changes and a full trip up the court for each team in less 20 seconds of non-stop action. And it wasn’t over yet.

Lafayette got the ball in immediately. They had no timeouts, and Perry quickly pushed the ball up court in an effort to catch the Mids off guard again. He used a nice screen to get free on the left side and drove to the basket. But he found Loehr standing in his way on the low block, preventing the easy lay up. Perry pulled up for a shot and was fouled by Davis from behind just as he released it with 2.8 seconds to go.

The Mids picked the right guy to foul. Perry was only a 66% shooter from the line. He missed the first shot, which meant he needed to intentionally miss the second one for Lafayette to have a chance. The long rebound bounced to the left. Incredibly, the ball wound up back in Perry’s hands on the left wing. But he had no choice but to throw up a prayer with time running out. The attempt fell well short, and the Mids had secured an important conference win to close out the week 2-0.

Despite being relatively young, the Navy Basketball team has already proven to be a resilient bunch. Davis, Deaver and Loehr hit critical shots against Lafayette just when it seemed like the Leopards were ready to pull away. The perimeter defense was the difference in the second half. Lafayette was not nearly as effective from outside the arc and finished shooting at 28% for the game. The Mids also dominated on the offensive glass, pulling down 16 compared to 8 for Lafayette. The second chance points kept the Mids close, and Cam Davis took care of the rest.

Last season, the Navy Basketball team never quite found its footing and struggled to a 12-19 record after going 20-12 the previous year. Now, the Mids are tied for second in the Patriot League just one game behind Colgate. If they can play a consistent brand of basketball, they should remain in the thick of things all the way to the conference tournament. Based on what I saw in the Lafayette game, these players don’t get rattled easily, so next week’s showdown against Army should be a good one.