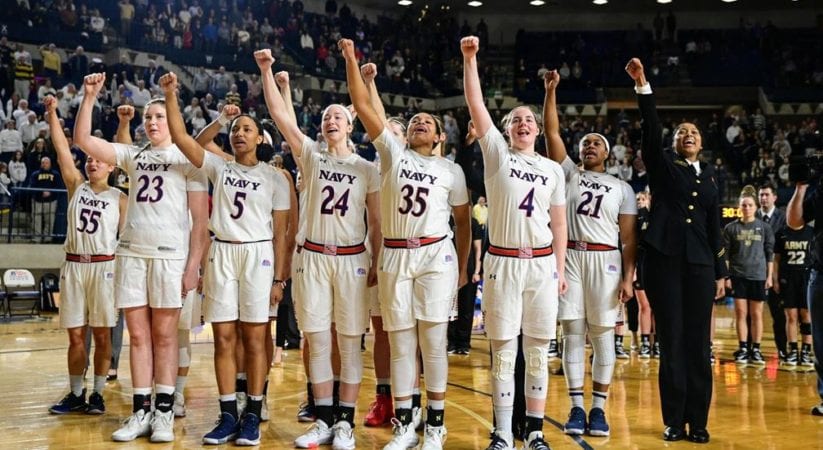 Both the Navy Men’s and Women’s Basketball teams were coming off a pair of nice wins in the past week. And it definitely didn’t hurt to have a little momentum going into the first of two meetings against Army. Each game was the usual back and forth battle, and when the dust had settled, the Navy Women had earned the right to sing second. But the Men’s team could not overcome a tough shooting day and will have to wait until next month to get another shot at the Black Knights. Let’s take a look each game to see why things played out the way they did.

The Stars Stepped Up

I have lost count of how many Army – Navy competitions I have watched over the years. But there has usually been one underlying theme – the stage is never too big for the team leaders. Saturday’s games were no exception. The Navy Women were led by guard Mary Kate Ulasewicz, a senior from Doylestown, PA. She ranks first on the team in total points and assists, and third in rebounds. Against Army, Ulasewicz went off for a career high 23 points, including 3 of 6 from beyond the arc. And she proved to be unflappable down the stretch, hitting three big free throws to put the game away.

The Mids needed Ulasewicz’s performance in a huge way. That was because Army forward Lindsey Scamman had a monster game of her own, putting up 21 points while hauling down 22 rebounds. She was a constant sore spot for the Mids all game long. For the team to come out on top, they needed to come up big in another phase of the game. They did. But before we get to that, let’s take a look at the men.

If you want to know the one player who has been the difference maker for the Navy Men’s Basketball team all year, you don’t need to look much further than junior guard, Cam Davis. He leads the team in scoring and is their most efficient 3 point shooter, hitting on nearly 40% of his attempts. When the Mids played Lafayette a week ago, it was Davis’ three pointer that gave them the win. Against the Black Knights, Davis knocked down 26 points on 11 of 20 shooting. He also connected on 4 of 9 from 3 point range. In the previous three games, similar production from the clutch shooting guard was enough to lead the Mids to the win. Unfortunately, that wasn’t the case Saturday.

That’s because Navy ran into a hot shooting Army squad led by senior guard Tommy Funk. As a team, the Black Knights shoot a respectable 48% from the field. Against Navy, they hit on 55% of their attempts, and they were over 60% in the first half. Funk rung up 26 points on his own, and didn’t miss once in seven trips to the free throw line. That included two big shots with 18 seconds to go, which basically ended any discussion of the Mids pulling out a last minute win like they did in the previous two games.

So in both contests, the stars stepped up. In fact, statistically speaking, they effectively cancelled each other out. That’s what leads me to the common thread between these two outcomes. And it was the reason why the Navy women came away with the ” W”, while the men just couldn’t quite get it done.

In breaking down the Navy Women’s Basketball game against Army, the first thing that jumped out at me was their stifling defense. That takes a commitment from all five players on the floor. The Mids really put the screws to the Black Knights, especially in the second and third quarters. Army only managed to score a total of 15 points in those two frames as Navy built a 10 point lead going into the fourth quarter.

The interesting thing is their field goal shooting percentage could have been much better. Ulasewicz shot well, converting on 7 of her 16 attempts. But overall, the team was only 20 of 62 from the field. The difference was the 25 turnovers they forced Army into committing. And in limiting the Black Knights to 48 shots, the Navy defense validated one of the basic tenets of basketball: you can’t score if you don’t have the ball.

Besides the tough defense spearheaded by senior Morgan Taylor, the Navy women got just enough help on the offensive end to close the deal. Freshman guard Mimi Schrader chipped in with 9 points off the bench to match the output from starter Sophie Gatzounas. Meanwhile, Army starter Sarah Bohn was held to three points. Her teammate Morgan Yancey never managed to find the basket, going 0 for 6 for the game. And when the final buzzer sounded the Navy women had secured a hard-fought 57-45 win.

The Navy Men’s team, on the other hand, couldn’t muster up the support Cam Davis needed to help get them over the top. Senior captain Evan Weick came through with 13 points. He also led the team with 8 rebounds. But the Mids bench only managed 5 points compared to 11 for the Black Knights. That, plus on off day at the free throw line proved to be the difference in the game.

The team actually outscored Army by a point over the final 20 minutes. But after trailing by eight at the half, the Mids couldn’t get any closer than five points the rest of the game. The final score was 73-66. Navy freshman Daniel Deaver, who recently won player of the week honors coming off a 25 point performance against Lehigh, never found his rhythm. As a result, he only managed one field goal and finished with two points. My guess is the Mids are going to need Deaver if they expect to win the Star game next month.

In the scheme of things, it’s just one game. But it does demonstrate the importance of the role players being able to answer the bell in these rivalry games. Often times, the outcome will depend on their performance.

Despite the loss, the Navy Men’s Basketball team is still in a second place tie two games behind Colgate. This was no doubt a disappointing setback. But the good news is they don’t have to wait a year for another shot at the Black Knights. The two teams meet again in four weeks. In the meantime, the Mids have two winnable games coming up this week against Holy Cross and Loyola. So they just need to take care of business and go from there.

For the Navy Women’s Basketball, the win over Army could be a real momentum changer. After getting off to a decent start this season, they endured a tough, nine game losing streak before coming from behind to beat Boston University earlier this week. Taking down the Black Knights could prove to be a catalyst in getting the Mids back to winning consistently. In the run up to the Army game, Mary Kate Ulasewicz spoke about everyone going for a full 40 minutes and players stepping up when it was their moment. That’s what happened in the game against the Black Knights, especially where team defense was concerned. And it was those players stepping up when their moment came that earned the Navy Women’s basketball team the right to sing second. It was a nice win that came at the right time. Now, they need to build on it.